Celebrating a landmark year, the 10th Annual No Tie Dinner & Dessert Party launched its fundraising season with a Kick-Off Party at Scott + Cooner for approximately 150 avid No Tie fans and dessert lovers. Announcing the 2015 theme “Under the Yum Yum Tree,” the Bollywood-style Kick-Off Party captured the magic, vibrant energy and exotic flavors of The East and things to come at the main event to be held on Saturday, March 28, 2015 at 7:00 PM at the Frontiers of Flight Museum. No Tie Dinner & Dessert Party is the largest fundraiser for AIDS Services of Dallas which provides housing and supportive services for low-income and formerly homeless men, women, and children living with HIV/AIDS (http://www.aidsdallas.org). 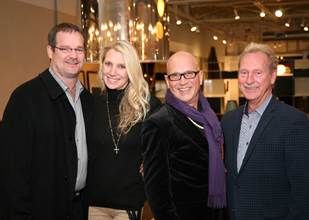 The Kick-Off Party revealed exciting news, from the 2015 date and theme to a  first-ever VIP ticket that will offer a deluxe lounge area serving premium spirits, luxury auction packages, and exclusive desserts. The event also unveiled a new website (http://www.notiedinner.org) and the 2015 chair committee. Stylist, interior designer and all-around Renaissance man David Nelson returns with Dennis Kershner, sales executive at Interior Resources, as Co-Chairs, Jody and Sterling O’Donnell serve as Honorary Chairs. Another first, No Tie has engaged Kristi Holman, owner of K&L Management, as coordinator of the spectacular tenth anniversary event which has been run by ASD staff and volunteers for the last nine years. Last but certainly not least, the 2015 No Tie Dinner & Dessert Party announced the 2015 presenting sponsor, Purple Foundation, a non-profit, all-volunteer organization that raises funds to improve the lives of people in the Dallas area who are living with or are affected by HIV/AIDS (http://www.purplefoundation.org)

ABOUT AIDS SERVICES OF DALLAS
The mission of AIDS Services of Dallas (ASD) is to create and strengthen healthy communities through the delivery of quality, affordable, service-enriched housing for individuals and families living with HIV/AIDS who are economically disadvantaged and to coordinate a broad range of direct services and programs. ASD’s mission includes advocacy, education, and the development of affordable housing options and community development opportunities, both for its residents living with HIV/AIDS, and for economically disadvantaged people. For more information about ASD, visit http://www.aidsdallas.org.

The 10th Annual No Tie Dinner & Dessert Party, the largest fundraiser for AIDS Services of Dallas, will be held on Saturday, March 28 starting at 7:00 PM at The Frontiers of Flight Museum (6911 Lemmon Avenue, Dallas, TX, 75209). Opportunities are currently available for sponsorship, dinner hosts, auction items, and volunteers. General admission advance tickets are $60 until February 20th or $75. VIP advance tickets are $130 until February 20th or $150.  Tickets are available to purchase online at http://www.notiedinner.org.

One response to “pick of the week: no tie dinner & dessert party 2015”