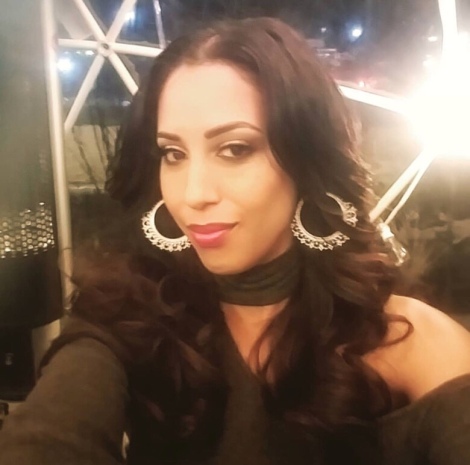 Kyndall Douglas found herself in the middle of a heavy storyline early in season 3 of the Real Housewives of Potomac. She is not a full-time cast member and, until her walking meetup with Monique, she was unknown by the RHOP fan base.

Since her appearances on the show, Kyndall has remained a hot topic of discussion. Recently I had the chance to chat one-on-one with her — to get a better understanding of how she fits into this puzzle.

Pop Goes the City: Had you watched RHOP before your appearance? I’d love to hear your thoughts on the cast picks?

Kyndall Douglas: Yes, I have friends on the show. So it’s important that I show my support. I think the cast picks are spot on. It has been a good mix thus far. Adding Monique was a brilliant idea. She brings a fire and confidence that adds an interesting dynamic. The other changes and deletions seem more than appropriate. You have to bring something to the table when dealing with these ladies. It’s not for the faint of heart!

PGTC: Your appearance on the show was a bit of a shock to me. I was not expecting the storyline involving Sherman and Gizelle to take such a turn or get this deep. What were your thoughts when you were approached about filming, knowing that some very sensitive parts about your past relationship with Sherman would likely be brought up?

KD: Of course I had to give it serious thought. When you take on something like this you have to keep in mind all those in your life that it might affect. I understood that for me this dynamic is not about Sherman and I. As you can see, I don’t have much to say about our relationship. And whatever was said about his/our past would have been brought up by someone else regardless of whether I was on the scene or not. That is the way these women interact with one another. Being a mean girl who covers up her insecurities by attacking others often makes you a target. So exposing her boyfriend’s secrets was fair play for them. The real issue for me is about my relationship with the women and how poorly Gizelle handled dating someone within her circle’s ex.

PGTC: We all understand that the Potomac community is small and that many of the ladies have known each other for a long time. That said, it did not surprise me to hear you describe Gizelle as someone you were once friends with. What I don’t think viewers understand is the depth of your former friendship. Was this a surface – we speak when we see each other at events – type of friendship or was it a tight friendship like you have with Charrisse?

KD: We were not as close as Charisse and I; however, we were not simply “hi’ and “bye” acquaintances either as she would like people to believe. We were social friends that shared mutual friends and often saw each other at social events and private gatherings. We would hug and spend time catching up on each other’s lives, kids, new happenings, and etc.

PGTC: Is there any hope for you and Gizelle to reconcile your friendship?

KD: I have seen the way Gizelle treats people she calls her friends and others in her circle. Based on that, I can do without that type of friend. No thanks!

PGTC: I have enjoyed your appearances and know that you have a life to share and a story to tell. If the opportunity presented itself, would you be interested in joining the RHOP cast? (I would personally LOVE to see this!)

KD: Thank you for support! I do have so much to share and a very full and interesting life; however, I’m not sure. There is quite a bit to consider. Becoming a primary cast member would involve more than just me. I don’t know if my loved ones are up for that. For right now I am enjoying my position and looking forward to Season 4!

Kyndall will be my guest this week on episode 10 of the Pop Goes the City podcast. Listen to hear her dish on her current friendship status with the ladies of RHOP and so much more.

Search Pop Goes the City on iTunes, on Google Play, or wherever you get your podcasts to subscribe. The episode will release tomorrow.

Pop Goes the City, established in 2011, focuses on life, society, and all the things that make Dallas & Collin counties great. Consider it your source to the best people, places, and things in North Texas…and beyond.

Pop Goes the City, established in 2011, focuses on life, society, and all the things that make Dallas & Collin counties great. Consider it your source to the best people, places and things in North Texas…and beyond.