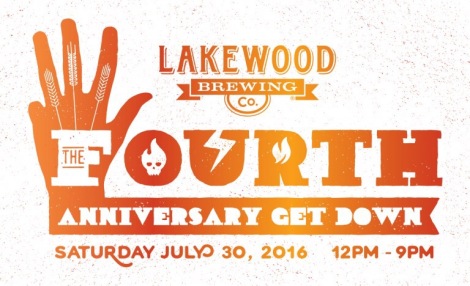 Come out to celebrate the 4th anniversary of Lakewood Brewing Co. at an epic party at the brewery Saturday, July 30 at the brewery (2302 Executive Drive Garland, Texas 75041).

VIP and General Admission tickets are available for the party.

VIP entry is at 12:00 noon and admission includes entry one hour before GA, souvenir glass, tasting card for six 5oz pours of beer, commemorative 4th anniversary t-shirt from Printed Threads, one food ticket from the Tamale Company, access to limited and rare offerings, and access to the VIP area in the Founders taproom and private patio. VIP tickets are limited to only 200.

General Admission tickets include a souvenir glass, tasting card for six 5oz pours of beer, and access to the brewery and beer garden. Entry times will be at 1:00, 2:00, and 4:00.

Starting at 6pm, we’ll open up to the general public, and beers can be purchased by the glass. VIP and GA ticket holders from throughout the day can still purchase additional tasting cards. Additional tasting cards are $10/ea. Printed Threads will also be on site printing and selling commemorative 4th anniversary t-shirts for those looking to take home some swag. Live music, food trucks, a photo booth, games, and more will also be featured throughout the day.

The Temptress (both regular and on Nitro)

Hop Trapp (both regular and on Nitro)

* Be sure to hold on to your souvenir glass, as all 5oz samples will be served in these to expedite service to all of our patrons. LBC employees will be rinsing glasses between samples.

Performing on stage in the Beer Garden:

Performing in the Taproom:

Food trucks (located outside in the back by our beer garden):

For Love of Pizza

The Tamale Company (VIP area only)

GET TICKETS HERE! Tickets will not be sold at the door. If you don’t have a ticket, you’re welcome to join the party starting at 6pm. Grab yours quick and get ready to party. Schol!

Scoop: Be sure to read the FAQs on the ticket purchase page. This will help you know where to park and gobs of other good information.