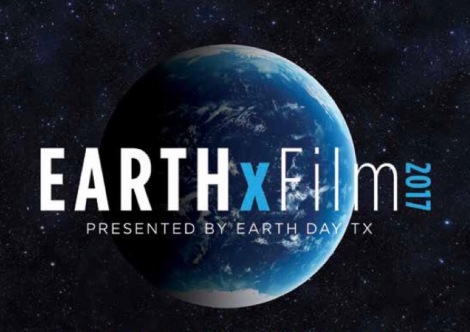 Creating EARTHxFilm within Earth Day Texas is an opportunity to use the power of film to greatly enhance our mission to educate the public about the reality of our planet’s environment, as well as to better illustrate the possibilities going forward further inspiring people to take action in a personal way. This impressive slate of films, projects, and panels, does all of that as well as being very entertaining.

We have been fortunate in our very first year to secure award-winning films, provocative films, and some very entertaining and exciting cinema with a focus on the environment. We are offering up a number of first-look opportunities for our audiences to see films and projects that have the potential to make a real difference in people’s lives in the future. The caliber of filmmakers and organizations who are supporting our inaugural effort only highlights the immediacy of the issues we face and the real quest for viable solutions that films help provide.

In addition to groundbreaking works, the festival will include free outdoor screenings for families, and a number of special screenings and works in progress. Of interest on a local level is Beau Ethridge and Daniel Nanasi’s WHERE’S THE FOOD? (WTF?), which will combine key clips and footage from their film, and a panel discussion by the principals featured in the film, about the sustainable solutions to the food deserts plaguing Dallas, Texas, where 500,000 people are food insecure.

Below is a full slate of festival events. Festival passes and tickets are on-sale now at earthxfilm.org.

EARTHxFilm is proud to offer a Vegan Farm-to-Table Dinner in conjunction with our partners at Bonton Farms. This evening’s pop-up restaurant will feature a unique menu prepared over an open fire by Cafe Momentum Chef Chad Houser. This EARTHxFIlm pre-event will feature the soul stylings of Quentin Moore along with craft beer and wine sure to pair well with all of Chef Houser’s offerings.

Join us for an EARTHxFilm sneak peek of clips from WHERE’S THE FOOD! and a Panel Discussion with Dallas-based filmmakers and subjects from the film. WHERE’S THE FOOD?! is a documentary (in production) and a transmedia movement focused on creating awareness and sustainable outcomes to food deserts in Dallas by showing stories of the people and organizations taking action toward solutions as well as vignetting families affected by the issue. On Tuesday, April 18, it will be a special complimentary EARTHxFilm pre-event in partnership with the Nasher Sculpture Center.

Join us for EARTHxFilm’s Opening Night Green Tie Event, including a screening of CHASING CORAL, a stunning green carpet made from recycled fishing nets and special receptions. Coral reefs around the world are vanishing at an unprecedented rate. A team of divers, photographers and scientists set out on a thrilling ocean adventure to discover why and to reveal the underwater mystery to the world.

The star-studded evening will celebrate progress, hope, and innovation in a global shift toward a sustainable and secure future. An amazing group of supporters will attend the event including Dr. Leonel Fernandez, Louie Psihoyos, Jamie Redford, Stephen Nemeth, Sylvia Earle, Jon Bowermaster and countless others.

About EARTHxFilm
Launching April 20-23, 2017 at Earth Day Texas, EARTHxFilm showcases films and emerging media that explore conservation, climate change, and the environment while honoring the heroes working to protect our planet. Our mission is to turn awareness into action, through art and media. We achieve our goals by partnering with top environmental, film and entertainment organizations across the globe.

Pop Goes the City, established in 2011, focuses on life, society, and all the things that make Dallas & Collin counties great. Consider it your source to the best people, places, and things in North Texas…and beyond.

Pop Goes the City, established in 2011, focuses on life, society, and all the things that make Dallas & Collin counties great. Consider it your source to the best people, places and things in North Texas…and beyond.