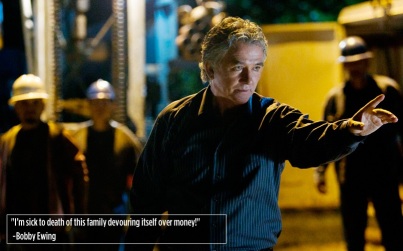 Episode six of DALLAS on TNT was kind of flat for me.  Maybe even a bit predictable.  It appears that John Ross and Elena are back to together.  Elena is like a tether ball…let’s see how many times John Ross and Christopher bounce her back and forth.

John Ross found out that Ann stopped the Ryland trucks and is looking to find other trucks to transport the oil.  John Ross is getting a lot of pressure to produce and move this oil.  JR has left him in a tough position.  He will either sink or swim.  Right now, John Ross is sinking.

Rebecca found something in the boxes of documents that Tommy had stolen from Southfork.  She is hiding information from Tommy and that could be dangerous.  Rebecca shows up at Southfork and tells Bobby and Christopher that she may have something to help them save the ranch.  How helpful of her…BUT…how long will her assistance be for the good of saving Southfork when her intentions began as unsavory?  Rebecca gave Bobby and Christopher a document that shows the mineral rights of Southfork being held in a forgotten trust.  Rebecca uses her discovery to beg for Christopher’s trust but it doesn’t work.  On the way out, Rebecca gets a nose bleed and Elena sees her and takes her to the doctor.  What is this all about? Hmmm…

While searching for a key to a safe deposit box, Christopher finally tells Bobby about the dvd he found and that he is using it to pressure to John Ross into giving up proof that JR was in on the deal to steal Southfork.  Of course, Bobby is displeased.  All the while JR is living it up in Las Vegas on the heels of Cliff Barns trying to ruin his assumed attempts to bring gambling to Texas.

Without another direction to turn, John Ross goes to his mother, Sue Ellen, to get help convincing Harris Ryland to send tanker trucks back to Southfork but Sue Ellen is running for Governor of Texas…anything like this could look bad so she refuses to do it.  If John Ross doesn’t start paying these people who helped JR steal Southfork, JR could lose the ranch.  Sue Ellen later gives in and goes to see Harris Ryland about getting the tanker trucks back to Southfork.  Harris agreed to send the trucks back in and writes a check to Sue Ellen’s campaign.

Harris is playing a mean game with Ann.  He sent her flowers and a locket.  Ann breaks down after receiving this and once Bobby sees the note from Harris, he take off to find him in his office and punches him. This love triangle is interesting to me.  I am eager to see what happens here.

The episode closes with Tommy learning that Rebecca gave the trust information to the Ewing’s.  She gave him her wedding rings and tells him to take them and get out-of-town because he is “not getting any money from the Ewing’s”…and announces that she is pregnant!  How this going to go over with Christopher and the rest of the Ewing’s will be very interesting.

As I mentioned, the episode was a bit flat for me.  It left me wanting so much more.  End the end, I only had one question: Since we know Marta is really Veronica Martinez, why is John Ross still calling her Marta?!

Stay tuned for my updates each week. As the show progresses, I am sure my opinion of it will too.

*‪I was selected to participate in TNT’s Dallas Roundup Network. I was not compensated for writing this post, but have received a screener of the first two episodes.