The State Fair of Texas – otherwise known as fried food heaven.  It has been a yearly tradition for me to go to the fair and I have not missed a year since I moved to Dallas.  Each year I come home happy, tired, and with a belly ache.  Well this year was no exception.  However, I did change my food rotation a bit because I decided that with all the fun fried foods it would only behoove me to break my usual Fletcher’s corny dog, tamale, and dippin dots routine.  And so I did!  First off Tater Tornadoes:

These little puppies were thinly spiral sliced fried potatoes covered in cheese sauce. Yummm.  Simple and delicious.  Next I had a Fletcher’s corn dog, and I don’t have a picture because I was too excited and I ate it before I remembered to take a picture of it.  Oops.  It was not the usual plain ol’ dog however.  It was the jalapeno cheese version!  It took Fletcher’s to a whole new level of awesome.  Finally, I rounded out my day with some award-winning Fried Cookie Dough: 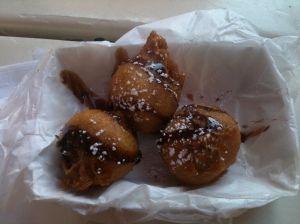 It was as good as it sounds.  The chocolate chip cookie dough on the inside was still soft while the outside was nice and crunchy with some chocolate sauce and powdered sugar on top.  Wow…I’m getting a belly ache just thinking about my day at the fair, but let me tell you it was worth it!  If you haven’t had a fried food fix in a while, hit up the fair this weekend because the last day is this Sunday, October 23.  Oh and by the way, you might want to bring some Pepto with you.  Don’t say I didn’t warn you!